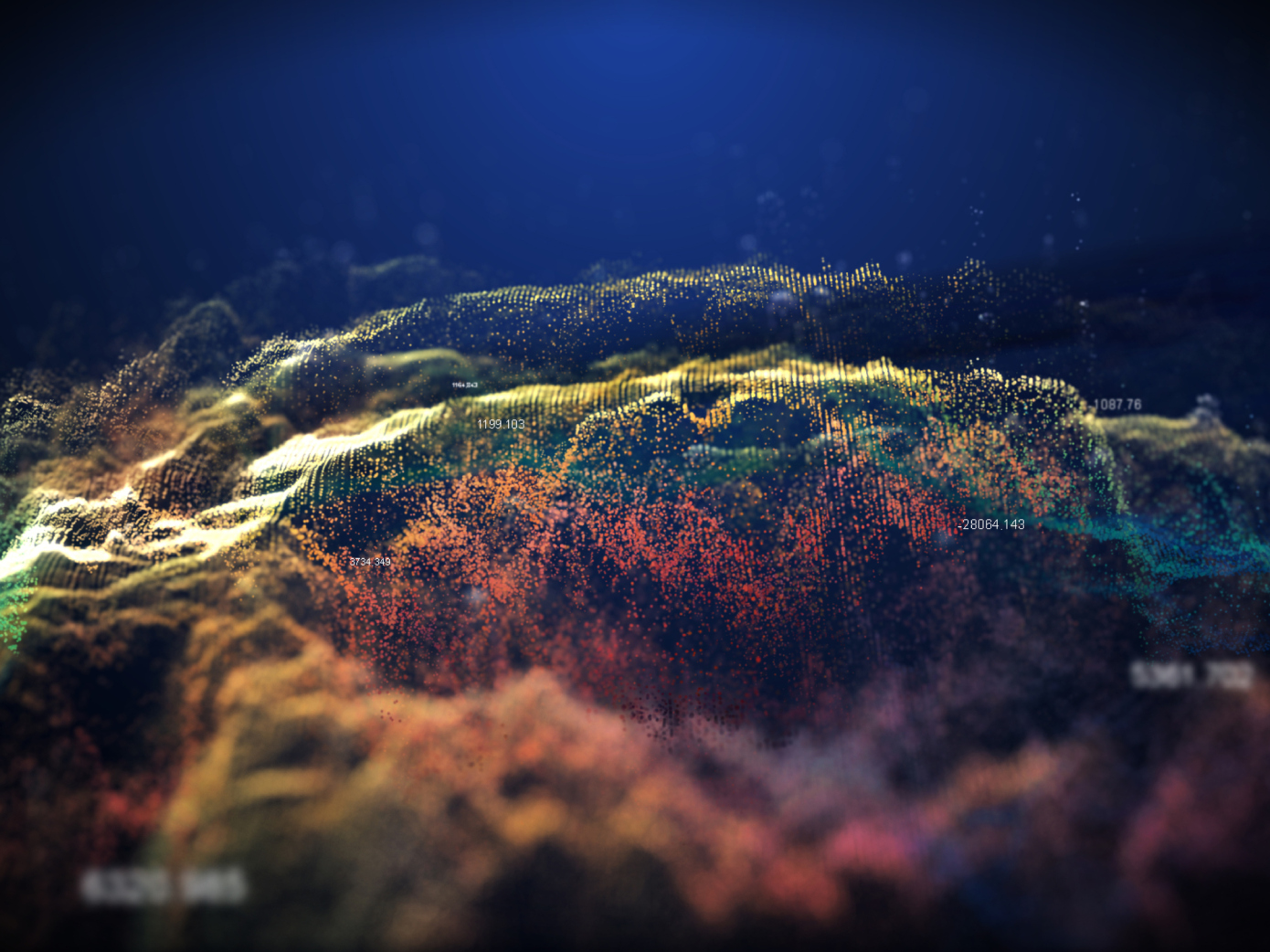 Voice of the AcreTM Process Overview

Athena's model is designed to answer the 3 most compelling questions any asset manager, insurance or financial sector professional asks when thinking about wildfire risk:
‍
What is the hazard level and probability of a wildfire occurring within the area of a property?

What is the severity and intensity of a potential wildfire?
‍
What is the exposure and potential loss risk if a wildfire were to occur?
‍

Athena's Intelligence is built on combining vast amounts of data originating from various wildfire and environmental agencies and organizations. In its original form, the data is disaggregated and unstructured. Athena's Voice of the AcreTM technolgy synthesizes this data into a usable and computable format.

The conditions that drive a wildfire's behavior and ultimate destructive potential are dynamic and fundamentally geospatial.

The originating data primarily comes from various geospatial formats. Geospatial formatted and structured data is different from traditional non-geospatial data as it is indexed to a specific location on the Earth's surface. Geospatial data allows for spatial relationships to be utilized in Athena's models, analytics and predictions. At the end of the day, data and the resulting analytics is only as good as it can be utilized in driving operational decision making. While there is A LOT of environmental and wildfire related data available, in its originating forms it is extremely difficult to be utilized to drive real business decisions.

Athena has years of experience in geospatial data processing for use in individual scale commercial decision making.

At the end of the day, data and the resulting analytics is only as good as it can be utilized in driving operational decision making.  While there is A LOT of environmental and wildfire related data available, in its originating forms it is virtually impossible to be utilized to drive real business decisions.

One can think about is as crude oil. You can't put crude oil into a car and go very far. Athena's aggregation & transformation processes are like the extraction and refining processes that turn crude oil into commercially usable material. 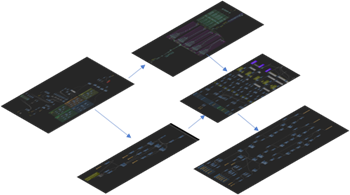 Athena’s indexing is created from a composite score made from a combined set of values from each of the layers processed through the Aggregation and Transformation Processes. There are 2 primary components of Athena’s indexing and scoring:  5 class index (Very Low, Low, Moderate, High, Very High) and Conditional Risk Flags (Green, Yellow, Orange, Red, Purple).

Athena's 5 class index leverages deep geospatial analysis of virtually every wildfire data back to 2010 (2010 was the originating year for a key component of Athena's data stack was first created). The composite scores combined with proximity analysis of the wildland urban interface (WUI) were analyzed to set the class breaks where the conditions that consistently existed within a wildfire’s perimeter were classified as a Very High or High-risk class.  However, cases exist where Moderate and in rare cases Low risk classes are encompassed by wildfire perimeters.
It would be unreasonable to consider the scores classed as Moderate or Low risk as High or Very High because those scores weren’t consistently within the perimeter of historical wildfires.  However, traditional underwriting and catastrophic risk models do include those geographic areas within their particular High or Very High-risk scores.  These models don’t have the level of underlying geospatial analysis that Athena does, thus Athena’s indexing allows for discovery of insurable properties that can be priced competitively in the market yet appropriately price the risk. This is where Athena’s proprietary Conditional Risk Flags come into focus.

Granular, dynamic, scalable intelligence made easy to understand and use.

The combination of Athena’s wildfire risk classes and conditional risk flags allow for a more granular characterization of the true geospatial risk.  It also allows for a flexible system that can adapt with dynamic conditions as well as scale with the addition of more and more data layers. Below are two individual properties, in this case literally within a mile of one another. Both are in Very High-risk locations. However, two elements differ between the two that have a material impact on how the building will be impacted by a wildfire.

To fully understand the wildfire risk of a particular location you need to assess both the regional and the location specific conditional risks. Wildfires are not the same as traditional building fires occurring within a neighborhood.  They originate in wildland areas and often aggressively follow the fuel (conditions) that feeds it towards a community, then neighborhood and eventually to a property.  Therefore, the conditional scoring and indexing must scale and sync across multiple levels of spatial resolution.  The default geospatial resolution of Athena’s scoring and indexing are a Location specific pixel (30 x 30 sq meter pixel) and a Census Block level which varies by number of addresses and density of addresses (ranges from a neighborhood block to several thousand acres in rural communities). 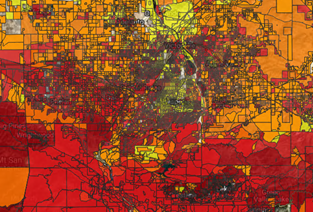 The landscape risk model applies Athena’s scoring and indexing along with the conditional flags to each individual census block.  Each boundary in the image represents a census block and each one has its own score, risk classification and combination of conditional risk flags. 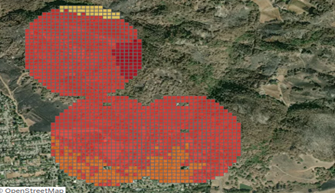 This model applies Athena’s scoring and indexing along with the conditional risk flags to each individual pixel.  The model creates 5 100-meter concentric circles around the property.   The percentage of pixels across each risk class and conditional risk flag across each proximity zone are used to geospatially quantify a property’s risk characteristics at the specific property location AND the property’s immediate proximity surrounding the property.

With the combination of geospatial transformation of a continuously growing stack of wildfire and environmental centric data sets, and a composite, multi-dimensional and dynamically scalable scoring and indexing structure, Athena produces a unique data set that is optimally prepared for an advanced level of analytics.  Athena’s probability and prediction combine to give a deeper assessment of a property’s risk from wildfire. The analysis essentially answers 2 critical questions:
‍
What is the current conditional probability of a wildfire occurring with the area of the property?
What is the predicted result of the property based on specific building attributes combined with the properties conditional fingerprint? (Either no Damage or Damaged 50% or greater). 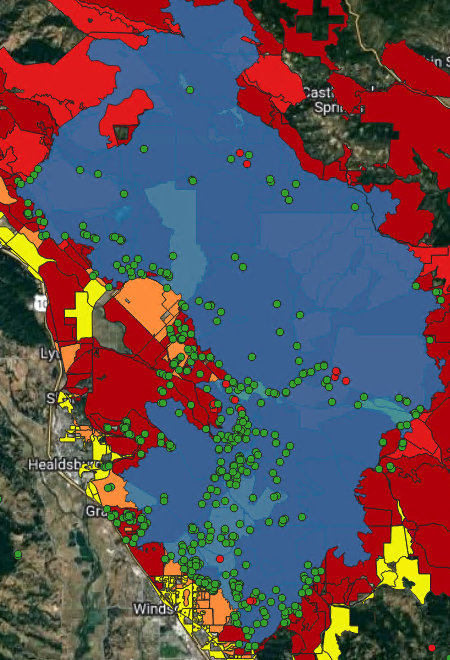 Athena then applies a unique conditional probability model that is driven by the specific combinations of characteristics within each census block.  Basically, Athena can quantifiably measure the inventory of profiles across an entire state and apply discreet, conditional probability statistical models to project the likelihood of a wildfire occurring within an area AND those census blocks that will be inside and outside the perimeter of the wildfire.

Built upon a dataset originating from CalFire’s inspection reports of properties involved with wildfires from 2013 onward, spatially blended with Athena’s conditional fingerprinting and leveraging powerful machine learning and AI tools through Athena’s Google Cloud Platform.  This model was trained to predict if abuilding would either have No Damage or Damaged (50% or greater) and has a prediction accuracy of 85% accuracy with a 90% confidence interval.

The training data included 17,479 records over multiple years and across 34 counties.  Deep learning and classification modeling was applied along with hyper parameter tuning to produce the current version of the model (7 testing versions serve as the foundation to Athena’s V1 commercial model).  14,702 records, separate from the training records were used to test the validity of the model.  The results were consistently producing 85%to 86% accuracy in the predictions (12,581 correct predictions).
‍

To make effective wildfire risk decisions, you need to not only know if a building will become damaged in a wildfire, but also if a building won't be damaged. Athena Intelligence can provide this level of analysis in order to support the most optimal decision making that protects a property's value and ensures a portfiolio's finanical resilience.